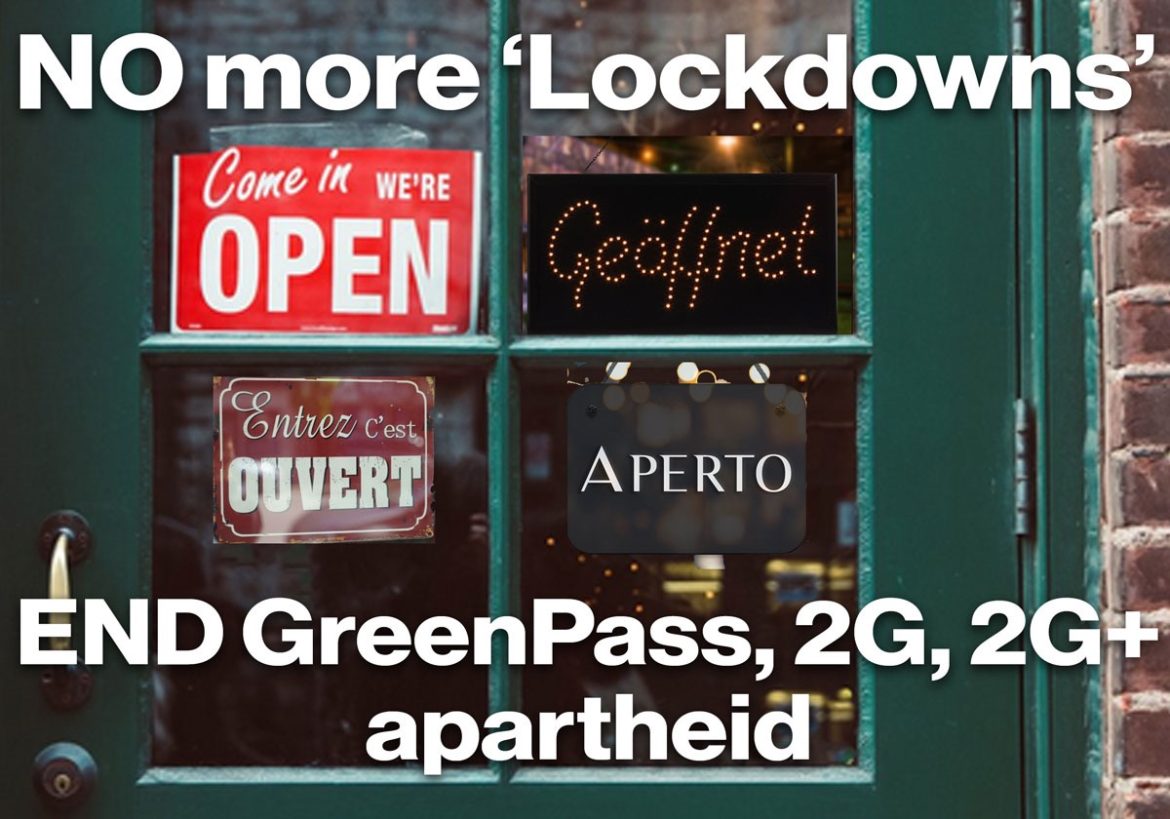 The best service anyone can give, is to refuse to take part on 2G apartheid!

It is Inspiring, how in The Netherlands, the business owners re-open on January 15th, with or without Governments approval.

Shop owners, Restaurants, bars, hairdressers, everyone who is currently forced to take part on segregation should follow the example of The Netherlands. Open up for everyone, refuse to practice 2G and 2G+! Governments can’t fine businesses for practicing what is morally and ethically right, based on common sense and scientifically proven evidence!

Anyone who cares about society, will not accept anymore the unacceptable. Protests will end only when the Governments admit they were wrong.

“One box, fits all” vertical thinking isn’t preventing pandemic or flattening the curve. The contrary, it causes a Tsunami of Protests.

Omicron and Delta variants break through all of these measures.

What sense does this make anymore, when recovered, double, triple jabbed persons are getting infected, followed by tests to allow them to access services, while the governments denies the access from unvaccinated individuals. Testing that’s negative, isn’t making any difference between vaccinated or unvaccinated people.

When vaccine isn’t preventing from infection, the rules should be the same for everyone. Are you willing to patiently wait that the Governments are accepting the truth? Some people have immunity against Corona virus, without ever have been infected with the original or variant version. According to Swedish research published on 28.11.2021.

Supporting article from December 17th 2020. It isn’t the first time this matter has been taken up. Why there is not more articles and publications regarding this? Surely a person who has already natural immunity against COVID19, shouldn’t be forced to vaccinate and getting their immune system messed up. There is absolutely no justification to restrict people’s movement either, under the current circumstances where there is no prevention of infection at all. Like with the Spanish flu, the virus mutates and becomes less serious, less deadly until it eventually becomes just another flu. Omicron might infect easier, but doesn’t result to as many hospitalizations if the persons isn’t of older age or have any other underlying medical conditions.

The Governments biggest fault is to use “one cure, fits all, that isn’t working”. Not everyone is getting infected, not even unvaccinated people, after spending considerably long time with infected person without any protective measures in place. They should be testing and researching, how many people actually who are unvaccinated are having natural immunity. Not blanket vaccinating everyone and mandating boosters without having a thorough look into these things. The Governments behaves like hysteric “parents”, protecting people from invisible harm. It’s true some people are getting seriously ill with COVID, however there is no rule, that all unvaccinated ends up to intensive care, many are asymptomatic.

What makes the whole thing even more disgusting is that physicians are not interested finding out more about their patients. Medicine is about research and learning, it seems the Government has placed a gag order on Doctors, not to search for answers and solutions beyond the vaccines. They are not up to protecting people, but covering up their failure and sitting on public funds, wishing to increase control and obedience among citizens. Breaking the spirit and free will, turning people to robots that follow blindly orders without questioning anything.

The contradictory information delivered by nations health departments, versus international organizations, is lying to the citizens. In consent forms its written the vaccine protects up to 90% from infection, while several scientists that researched the vaccine efficacy against Delta variant came to concluding around 40%. Against Omicron, this figure is even lower. These forms have actually no real information at all, repeating words ‘Very rare’, ‘in rare instances’. There is no truthful communication in any of them. No one trusts a person who lies in significant matters as these, that affects everyone’s daily life and well being.

It’s simple: Governments must stop lying and spreading false sense of security. Its disinformation at the same level with conspiracy theorist or COVID deniers the Governments blame for everything.

“Vaccine mandates proposed by the EU President, Von Der Leyen, Austria, France, Italy and Germany are not having legal or scientific leverage to make them compulsory”

Vaccines under research and lacking prevention of disease cannot be made mandatory.

Currently vaccinated individuals get sick, such as unvaccinated. Vaccinated people are suffering from recurring past diseases, compromised immunity and other ailments. Until there is a vaccine that prevents the infection all together, no one can be forced to take part in medical trial. Make sure you don’t sign anything under Governments pressure. Something that is forced on anyone, cannot be asked people to sign consent forms. The liability for violating Human rights stays on government.

The European Commission is a union, appointed leadership, none of them has been elected by the citizens. Their GreenPass which was passed by the EU Parliament for traveling purposes are now used to access restaurants and bars in Spain. Ask yourself, is it their business at all, where you eat and drink?

EU is in process taking over control and monitoring everyone’s private lives, from social life to imposing mass-surveillance legislations like ChatControl, data collection, tracking financial transactions and other aspects in life that are strictly confidential and protected under fundamental Human rights law right to Privacy.

One thought on “Call for European Countries business owners: “Open up with The Netherlands on January 15th!””