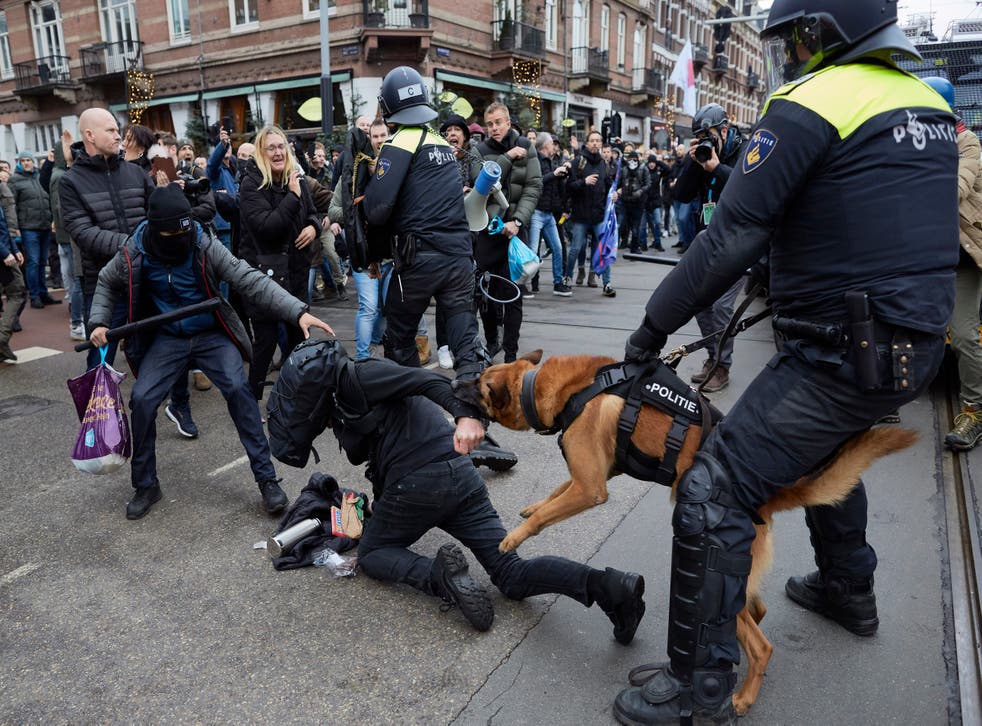 Last Sunday The Netherlands saw another massive protest against Corona Measures. Despite the event being declared “illegal”, many people still decided to join and exercise their freedom to protest in Amsterdam. The Dutch Police gathered in big numbers in an attempt to stop the protest. Some 10.000s people turned up to take part in the demonstration on the Museumplein, many of whom marched through the city to the Westerpark.

But the event didn’t end peacefully due to violent police action against the human rights activists. Shocking viral video footage shows a police dog biting an anti lockdown protester, yanking him around as officers violently beat others with batons.  A clip that was seen over 10 million times on Twitter shows the dog clamped onto the left arm of the maskless man who was among the thousands marching in Amsterdam. The human rights protester cries out in pain as he tries to flee the dog, just to be helplessly flung around, crashing face forward onto the street. A line of officers then use their batons to beat back crowds who desperately trying to reach the mauled man.

The dog’s handler also uses his baton near where the K-9’s jaws clamped on the man’s arm, with the animal refusing to let go throughout the 21-second clip:

Other footage showed officers again using batons on the protesters as several thousand people joined forces in the capital in defiance of strict lockdowns and vaccine mandates. The protesters had earlier unfurled a banner that read, “Less repression, more care” near the Van Gogh Museum. A group of people in white overalls and white masks held up signs, including one that said “It’s not about a virus, it’s about control” on one side and “Freedom” on the other.

There was a heavy police presence on the square and in nearby streets. The municipality designated the area as a security risk region, giving police the authority to frisk people preventatively. The demonstration came on the same day Dutch police said they would take action to protest the increasing demands of their work. Union representatives have said riot police would continue to work, if necessary.

The violence didn’t go unnoticed. The UN Special Rapporteur on Torture Nils Melzer lashed out at the actions of Dutch police officers during their handling of coronavirus protests in the Netherlands. Nils Melzer sent out two tweets criticizing officers with videos from a protest on the Malieveld in The Hague last year, and a protest in Amsterdam this past weekend. He then publicly asked people to provide him with verifiable evidence of more police brutality as he is visiting The Netherlands soon. He mentioned this in the below tweet and provided a special e-mail address with it so you can submit the material in a safe and secure way.

The Dutch Police also confirmed that they have received online complaints about the police action but these are not yet formal, broadcaster NOS reported. The UN special rapporteur for torture is among those who reacted to an uploaded film showing a police dog attacking a demonstrator.

In preparation for my official visit in 2022 to #Netherlands, #Poland & #France focusing on #PoliceViolence, I invite victims, witnesses & NGO to submit verifiable evidence (Eng/Fre) on this & other incidents:

The UN rapporteur announced that an official message of protest will be sent shortly. Earlier in the day, he shared the much watched video showing how a police dog grabbed a man in Amsterdam last weekend. Professor Nils Melzer is the Human Rights Chair at that Geneva Academy of International Humanitarian Law and Human Rights, and a Professor of International Law at the University of Glasgow. For over five years, he has served as the UN Special Rapporteur on Torture and Other Cruel, Inhuman or Degrading Treatment or Punishment.