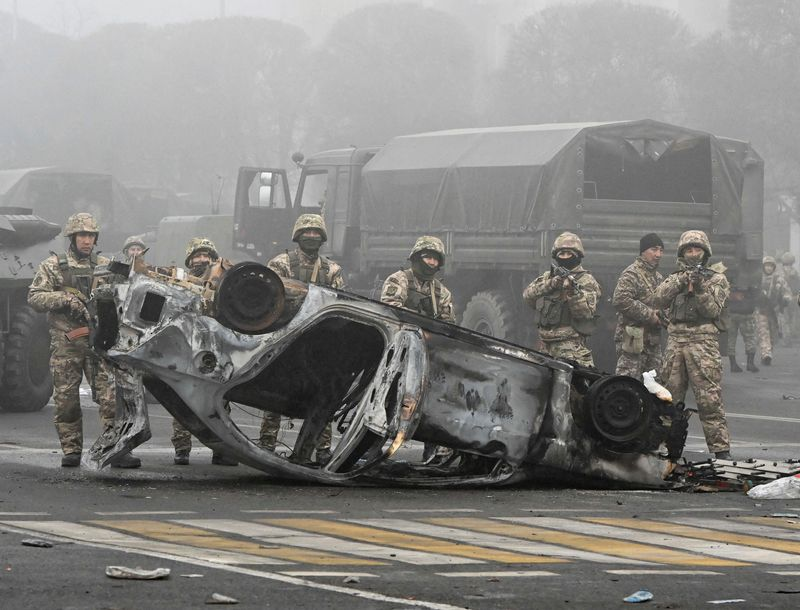 The oil-rich country located in Central Asia has been the scene of massive protests in the last few days.
Thousands of demonstrators took to the streets and the situation soon escalated into riots of unprecedented levels.
Police and military were unable to stop the angry crowd, so what’s going on in Kazakhstan? 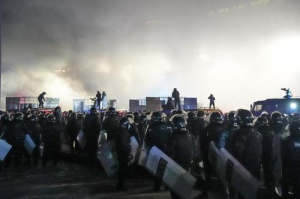 Kazakhstan, a Central Asian nation of about 19 million people is not a country where protests happen often.
But last Sunday on January 2, several hundred people took to the streets in Zhanaozen, a city located in western Kazakhstan, to protest against high gas (LPG) prices.
The price went from about 12-14 U.S. cents at the end of 2021, to 28 cents in the new year.
The protests soon spread to the rest of the country, the largest the country has seen since it gained independence on December 16, 1991.
Thousands of people also started taking part in the protests in the former capital of Almaty.
But what started as a protest against rising fuel prices quickly grew into a expression of general dissatisfaction with the government, because even after the announcement on Tuesday that the fuel prices were to be lowered again the protests did not stop.
Even after President Kassym-Jomart Tokayev announced the resignation from his cabinet last Wednesday, it did not appear that the population was satisfied with this.

“Tokayev and the government might discuss the social and economic situation in the country and they
may decide to raise salaries and social payments in the hope that it will ease the tensions. but in
the end, everyone understands that the reforms won’t be real,” said Daniyar Khassenov, a Kazakh political activist based in Kyiv.

The protests in Kazakhstan, which are already rare in the normally quite stable country, quickly took on extreme forms.
Protesters and police became embroiled in violent conflicts that spiraled to such an extent that
even the army was deployed.
Government buildings were massively occupied and in Almaty, the largest city in the country, a
administrative government building set on fire. 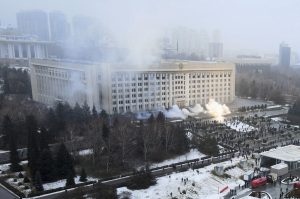 Although the army had initially cordoned off the area, this was not enough to deter the demonstrators
to stop.
During the riots in Almaty, an estimated 190 protesters were injured and the material damage was enormous.
Cars were set on fire, windows of shops were smashed.
Some 353 officers are said to have been injured so far. The death toll among police and security service members has reportedly reached 13.

The president called the protesters ‘terrorists’ well trained abroad, and pledged to crack down on anyone taking part in the protests.
On Wednesday he declared a nationwide state of emergency.
Given that the situation has already completely escalated, President Kassym-Jomart Tokayev
asked allies from the Collective Security Treaty Organization (CSTO) to send in peacekeepers to assist in stabilizing the situation.
Russia, which is part of the bloc, has already deployed paratroopers to guard government offices.