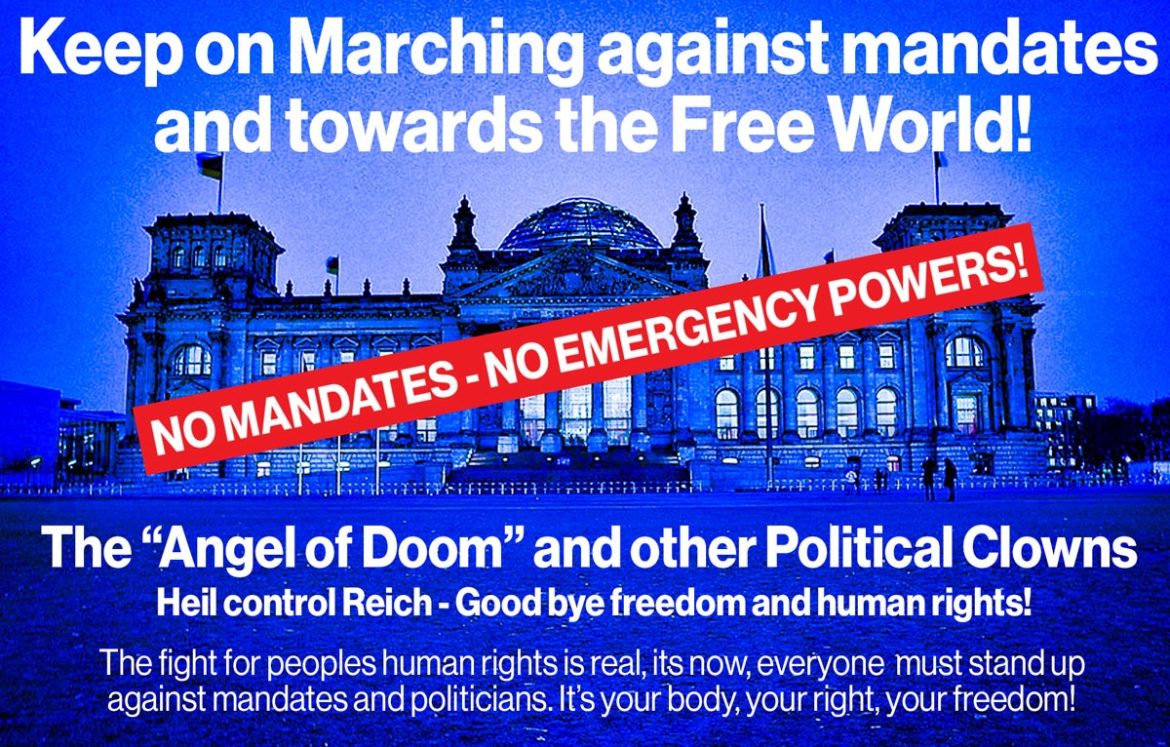 The “Angel of Doom” and other Political Clowns

Stop State emergency powers extension, that are ending on March 20th. Don’t let the German political clowns prolong them a day more. Two years have passed since the first wave, it’s a high time people take back their decision-making power over their own lives! Stand up against Lauterbach’s dream of German Vaccine Mandate Reich! Most importantly stop politicizing protests, it doesn’t matter if you are right, left or center, medical integrity, freedom of movement are human rights that have nothing to do with politics.

The State propaganda machine is still going on strong, helping the struggling Government that has lost its credibility to distribute falsehood to convert the purpose of the protests and walks as antivax, fascist and extremism events. People are walking against State misusing their emergency powers, that allow people to be closed out from social life, causing huge damage to peoples well-being. New studies are emerging that are linking lockdowns to Post Traumatic Stress Syndrome, a condition that is linked to traumatic event. It has also been linked to be caused by prolonged stress, and being constantly exposed to “fear” and doom streamed by mainstream media. It is causing similar response than sever short term traumatic event. People are living in constant fight / flight mode, it will take years to recover from the trauma the Government has caused to its citizens, the longer the Government has emergency powers the longer they are capable of damaging citizens well being.

The German “Angel of Doom”

On 7th February several German states announced lifting 2G regulation on retail sector, following Bavaria’s way, after the court ruled 2G violating constitution, 2 other states have been ordered by State courts to abolish 2G regulations so far. Causing a sour response from Germany’s Health Minister, Lauterbach, who condemns these plans incomprehensible and undermining the politically set pandemic response course. He assumes it is more important to keep up the pretence, set by his politics, than show flexibility and adaptability under rapidly changing pandemic landscape. He recently estimated 500 deaths a day, without giving any details, to which specific scientifically proven information his estimate is based.

As a background, Germany is using hospital and intensive care bed occupation as a main marker to apply restrictions. The Hospitalization rates have not increased, neither the number of people in Intensive care. Why there is 2G restriction in place at all in these circumstances. Several states have reached the peak already and are experiencing falling number of incidences. The recent talks of relaxations are limited to retail, the culture and access to services like hear dresser remain inaccessible to unvaccinated, that are barred from entering these venues.

Are the Germans ever going to gain back their freedom with him as a Health Minister?

How can Lauterbach be so sure, justify his prediction and advocating for vaccine mandates, using fall/winter as his main driver? His “success” is record number of COVID19 cases from both sides, unmissable evidence of failure of 2G! If the world is lucky, Omicron and its stealth variants could further variate to lesser severe virus. If not, there will be need to further invent new vaccines that are effective against the new variants, by then the wave is already over. It is far too late to mandate vaccines that were effective for Alpha and Gamma variants, that were not as effective against Delta, except for severity and with Omicron zero transmissibility protection.

The truth is: no jabs are stopping the wave and no shots are preventing the formation of a new wave. Coercion, enforcement, fines are not helping, if Germany wants to prevent a civil war, they kick him out of the office! Politics don’t belong to health care policies.

The free state Bayern, declared that they would not applying the federal law that set vaccination mandatory in nursing homes and healthcare sector. Söder’s declaration was received in dismay by several parties and politicians. To me, he is right, because why mandate something that is simply useless at this stage, it will not prevent transmission to vulnerable people. Invalidating the human rights abusive mandate. As a non-political person I find the situation almost amusing. Politicians are clearly losing it, regardless if the statement was given to gain political popularity, the message was welcomed. Who really cares what was the ultimate purposed behind it, if it will help to demolish the vaccine mandate all together for everyone!

The mandate for healthcare professionals comes into force on 15.3. This week EMA published it starts a research on recent reports received on Pfizer/Moderna vaccines that are linked to missed periods or extensive bleeding. In EMA site, women are twice as likely to experience adverse reactions than men. In health care sector women are still outnumbering the men, especially in nursing positions. The German Constitutional Courts refusal to grant a stay on mandate, while it reviews the case. Which is directly causing more casualities, as many side effects are irreversible. Why should people submit becoming guinea pigs or lose their health and livelihoods?

Under Merkel’s government the RKI was criticised being too much under political influence, with Scholtz lead government and Lauterbach as a Health Minister, the nation has gone from dark place, to another one, the country is still under rule of POLITICAL Health Care policies. Lauterbach has as much transparency than a soldier inside a tanker, supposedly visible to outside world. His way is not engaging the citizens, he is setting the course back in times, when citizens were beating up each other and snitching on their neighbour. Just last week 6 adults beat up a 17-year-old teenager, a child still, for not wearing a mask. A direct consequence of propaganda feed in German’s mainstream media and communication of the people in power.

The intolerant Government health officials are inciting violence in the streets, using the Mainstream media propaganda machine to scare people more, spreading hate and false accusations against unvaccinated citizens. Lauterbach must have read the recent research and study reports, but refuses to admit his policies are discriminatory, dehumanizing, disproportioned and are not serving the best interest of the nation or are up to date. Lauterbach is comparable to dooms day advocate, with his erratic behaviour. No one can predict the future, especially not fall/winter2022 at the present.

The best course of action is to stop using the “G’s” that divide the nation and are ruining the economics. They should stop planning for general vaccine mandate at least until 2024, because the research of present available vaccines isn’t finished until then. As long COVID19 vaccines are voluntary, people need to consent on taking them. If they are mandated and people are driven to corner to take them, the mandate is followed by thousands of litigations against the healthcare professionals who administrated the vaccine and the Government. Taking vaccine under mandate pressure isn’t done voluntarily with informed consent, leaving the door wide open for legal suits and demands for liabilities.

The Government can call responsibility and duty of its military forces, that have taken an oath to serve the country, but civilians have not. At the present it seems only 19% of the country’s population hasn’t taken vaccine. The goal has been reached and it is fundamentally unethical to ask remaining 19% to take a jab, because everyone has their own reasons why they haven’t taken it. Many are people that wait until the vaccines are fully approved and research has been concluded (estimated in December 2024). This is a fundamental human right the state must under any circumstances violate.

German Ethics Council has given greenlight mandating vaccines, lifting the ethical barriers to make it compulsory for everyone.

As a background, Germany has an Ethics council that consist of 24 members, the Government has appointed. To be clear, I largely question the credibility of such a council to give advice of over 83 million citizens ethical rights, as these people are not truly independent as they should be in their position.

Ethics Council is like a Jury, they should not have been exposed to media at all, in case like deciding mandating experimental vaccinations. Its 24 members are having conflict of interests, invalidating the legality of the decision as it has not been made in absence of manipulation and preexisting bias that has affected its impartiality.

Deciding on matters like vaccine mandate, that has proven serious side effects and death, cannot be decided by members, that are all, but few vaccinated. Not at the present climate of one-sided reporting, known existing risks and moreover, vaccines ineffectiveness to prevent infection.

Recently in Germany the court ruled in favor of divorced father, who wanted his child to get COVID19 vaccine child’s mother opposed. In Court ruling, they stated that divorced parents who don’t agree regarding vaccines, the court grants the decision power to a parent, who is following STIKO committee recommendation. The child must have a final say, but in the event, that she/he has been subject to manipulation, that could affect her/his ability to make informed decision independently, the parent decides.

This made me question the impartiality and conflict of interests of the German Ethics Council. The vaccine mandate is unethical and violates the constitution Article 2 (2) in Germany. In the end can you call the council ‘Ethical’ because they have given a greenlight to a legislation that is against the Human Rights and unconstitutional?

Don’t give up! Keep on walking for your rights. “No Mandate” walks and marches, are demand for respecting right to self-determination, that is written in Constitution and Universal Declaration for Human Rights! They are non-political for most and not affiliation-based movement to stop the State abusing its powers.