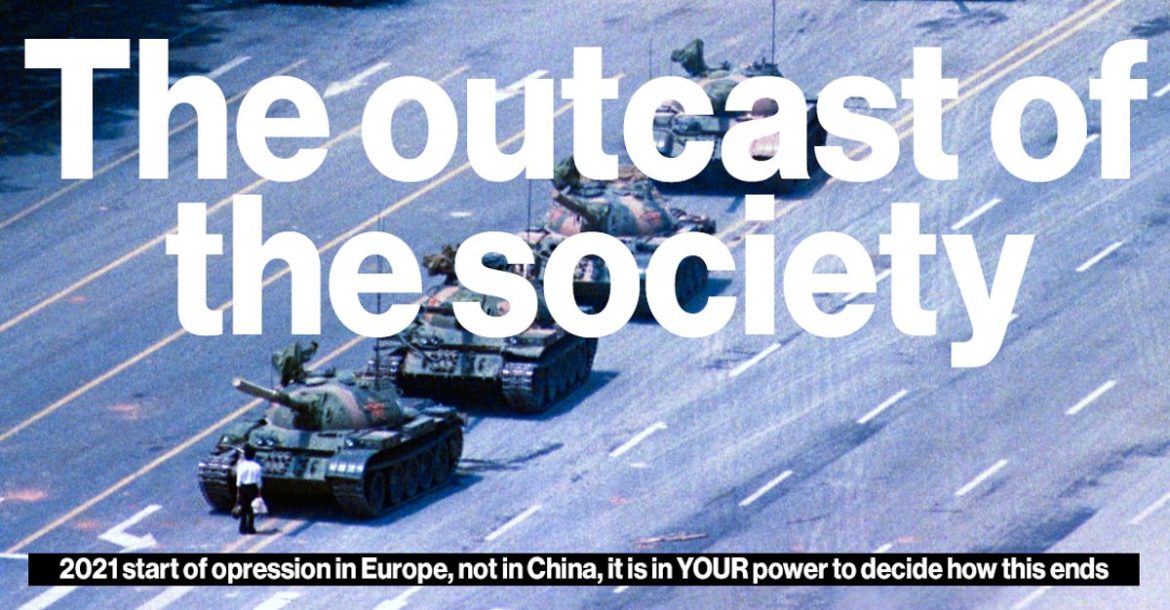 2G and QR-code coercion and oppression equals to Cruel, Inhuman and Degrading Treatment by the states

How well have we fared so far? Soon its two years since the pandemic spread all over the world. A year ago, we were in the same boat, today we have the cruiser and the little dingy sailing the same waters, facing the same storm but so divided.

If you have read history books it was quite common in the past to have outcasts, who were spat at and beaten up, thrown out of the bars and other venues, where the upper-class indulged themselves, in the meantime the outcasts where lucky enough to catch a glance from outside before they were chased away. Looking at what we have today, we have gone backwards a light year, isn’t it shameful?

Since 1st of February, many of those who were still ‘somebody’ yesterday, joined the outcasts because they refused the booster jab. An unjust and politically based new rule, that not even the Big Pharma recommends in their documents and reports. While surfing the EMA website, many of them are still under evaluation, until end of the year 2023 or 2024. How morally corrupted our society is? Mandating vaccines that have not reached the final approval? There are many unknowns and very little-known benefits as it is today.

Recently the highest court in Austria demanded answers on lockdowns, masks, and other measures that dehumanized and discriminated all unvaccinated individuals. Does this make any sense to you? In the meantime, Germany is pondering issuing or not, vaccine mandates, should it be for all or just over 50 years old. We are discussing human lives here. Not only about if someone gets infected with corona, but also if someone who was healthy, falls under the category of unlucky ones and becomes a victim of vaccine injury. Shouldn’t this be a decision everyone must make for themselves? Take a risk or continue watchful waiting. And naturally the 2G rules it all, without any proven benefit Germany entered its 3rd month of coercion and repression that violates the constitution.

Taking a vaccine or not, doesn’t make anyone lesser person than they were before the pandemic started. What gives the leaders the right, to mandate and dictate people’s lives? Especially when as a fact, the virus infects everyone. Sometimes, often, when one is not sure what to believe or think, its best to follow one’s heart, what are we as a human being and what makes sense to us. This is outside anyone’s influence or believes, when we look at the mirror and see a person, can we be proud what we are, or do we feel guilty the way we treat other people. No one else than ourselves can know this. Its not a job we get paid for, but it brings us inner peace and happiness. Unlike hate, that no one can seriously feel towards another human being, as it’s something unpleasant, that only brings pain, sorrow and self-loathing in the end.

The toll on peoples well being is enormous indeterminable at the moment. Did you elect these people in power, in hope they would transform the world you live in, to something better than it was in the past? When we look at the world how it is today, it’s a chaos by far worse than it was ten years ago.

In The Netherlands the people united, the stores and restaurants opened, with or without the permission of the Government and they succeeded to open up for everyone. This should happen in every nation, currently applying QR codes and 2G regulations. For a simple reason it would be the best for everyone. What can the Governments do? Send fines? When no one pays them, there will be a case to fight in courts. A case that would end the discrimination and leaders wrongs. It is in our own hands how the future will be. Is it one in freedom or one with a huge divide between two social classes. A thought too painful to imagine.

Next weekend, and all the following ones, join the protests and demand the states to respect human rights, demand them to stop dividing us because we are all humans after all. We thrive from love and fall from hate. It’s some kind of nature’s law, no one can be happy having too much hate burning inside their heart.

It’s time the state listens to what the people have to say! If you are confronted with injustice and do nothing to stop it, you become part of a system, that crushes human mind and heart. I am sure you don’t want to look at that person from the mirror and one day regret, what monster you have become. It’s never too late to rethink and choose the right side in the battle, that threatens the humanity as a whole.

The recent study from John Hopkins University found that Lockdowns and measures similar to it, 2G (lockdown to unvaccinated people) reduced deaths only by 0,2%. Link to full study: here.

“The researchers say lockdowns had no noticeable effect on reducing COVID-related deaths and a “devastating effect” on economies and social ills.”

Hold the people in power to account and help to stop this madness that in the end brings nothing good at all to anyone!

Resist and Disobey! We are all the Tankman today in our own nations squares!