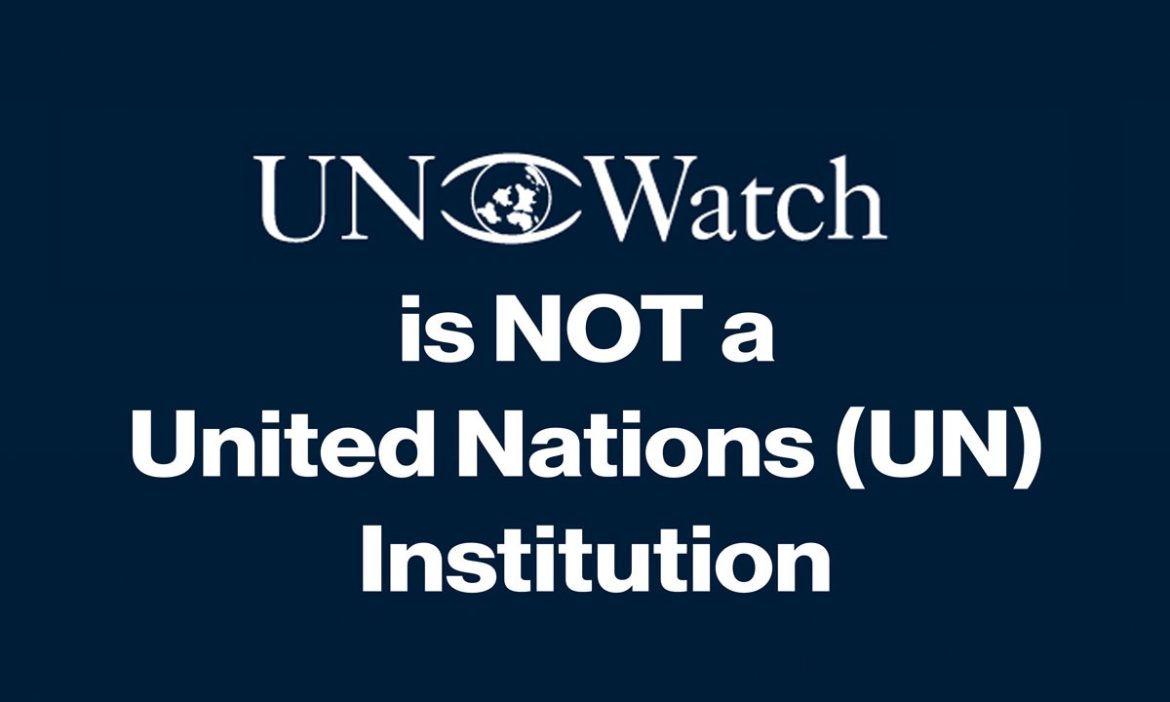 With the misleading name, it is easily confused to be an UN Organization which it isn’t.

“UN Watch is an accredited NGO in Special Consultative Status to the UN Economic and Social Council and an Associate NGO to the UN Department of Public Information.”

UN Watch is known its one-sided stance in regards to different countries Human Rights violations. Strongly pro-Israel organization, it criticises all rulings made by International bodies, that are condemning Israel’s Human rights violations in Palestine. Including slashing out to countries who have voted in favour for the rulings.

How can a self-proclaimed “Watch Dog” of the UN, a Human rights NGO, support and defend human rights abuses in Palestine, while not Zionists Israelis are condemning the land grabbing, arbitrary arrest of men, women and children. UN Watch behaves like a Zionist NGO, not an NGO guarding the highest principles of Human rights at all.

The Organization recently called for resignation of the Professor Nils Melzer, UN Special Rapporteur on Torture and Other Cruel, Inhuman or Degrading Treatment or Punishment, who condemned the Police Brutality that took place in Amsterdam, The Netherlands on January 2nd. A highly defamatory demand that lacked any substance. Nils Melzer shared videos from the 2nd January, as well as a video from previous similar abuses by the Dutch Police force from March 2021. In both instances the protestors were bitten by the trained Police dogs.

The Executive Director Hillel Neuer, tweeted on the 4th January, accusing Nils Melzer for not having investigated the cases of Police Brutality, before tweeting and condemning the actions of Dutch Police. It’s a fact Nils Melzer called for evidence after the horrendous videos started circulating in Twitter on the 2nd January. There are large number of witnesses who can testify that the Police Brutality took place in Amsterdam on Sunday the 2nd.

It is absurd to attack Nils Melzer, who seeks justice for the Dutch citizens, to be attacked by UN Watch. The motivations behind this can be well understood, as there isn’t anyone who is supervising and watching the “Watcher”. On the 6.1, Hiller Neuer tweeted an opinion given by two Dutch HR law experts, Prof. A. Buyse and Prof. C. Ryngaert, who were interviewed by Dutch news agency on the matter. No doubt this kind of statements are easily acquired, its comparable to interviewing China’s Xi, to comment if someone critical to China, did act in good faith. Incidentally the Dutch also withdrew a funding for the Palestinian Union of Agricultural Work Committees on the same day. UAWC is a leading agricultural organization in Palestine that works to support small farmers and vulnerable communities.

The UN Watch NGO cannot be considered defending Human Rights in an unbiased manner that respects the rule of law, or lives up to its mission. Human rights are universal and belong to the whole world’s population. UN Watch condemns harshly human rights abuses in China, Russia, and countries that it considers critical to Israel’s Human rights abuses of Palestinians. This discredits the UN Watch credibility to be in position to criticize the United Nations Human Rights Institutions and especially Professor Nils Melzer, who is defending human rights of the whole world’s population. Regardless of political, race, religion or sexual orientation.

On 4th January, after Hillel Neuer tweet, that resulted to immediate strong response, he accused people, including the Dutch citizens, being “Russian trolls”. A grave accusation, that presents arrogance, one sided biased view and acting in bad faith.

“One should also assume that many of the accounts pronouncing on this issue are in fact Russian trolls designed to generate strife in the Netherlands and other Western countries.”

It would be interesting to know, who were the person(s) in position in the Netherlands, that called for the defamatory action. Was it only by request of the Dutch or possibly including the US and stakeholders. Nils Melzer dismantled the torture, inhuman degrading treatment of Julian Assange and the smear campaign orchestrated by the US and UK Governments. Is this incidental at all?

Without persons like Nils Melzer people are left defending themselves, relatively powerless to stop the Police Brutality and ill treatment of global powers. If anyone, it is Nils Melzer who has had his hands and heart on defending Human Rights in dignity and honesty rarely seen in todays world.

We expect nothing less than a public apology from Hillel Neuer. The people in power, in The Netherlands should issue an apology to Dutch citizens too. We are not blind, stupid and ignorant in front of injustice. We see what the Dutch government is doing and how it was convenient to their interest, to use the UN Watch in an attempt to stop the uncomfortable investigation on the Dutch Police Force.

Who are the donators behind the UN Watch Organization? Who are the other member NGOs and Civil Societies Associations affiliated with the UN Watch? Its website https://unwatch.org gives no information, except its leadership and advisory board. An Organization that functions in conflict of interest from the start, cannot be trusted giving honest and impartial statements.